At the moment there is only one spot the difference in this quiz. This is because I can not think of any more, so if you have any suggestions then please email them in. 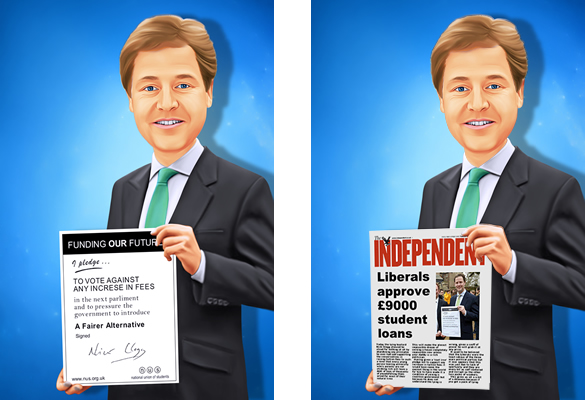 Even in this day and age, even when dealing with politicians, the gullible masses believed that if someone publicly signs a promise they would keep it. Many people also believed that the Liberals were probably the least odious of the three main political parties before they proved that this was simply due to lack of opportunity.

In 2009 the then leader of the Liberal party publicly signed the pledge to vote against any increase in tuition fees. In fact he pledged in April to scrap the “dead weight of debt”. At the time the tuition fees were set at £3000. First sniff of power and anything he ever stood for was out the door. It took three years before he finally even got round to apologising for his dishonesty and that was only because it had become apparent that his lying had decimated his entire party. Great work Nick, the National Association of Liars are proud of you.