It used to be said that honesty was the best policy. There are a number of reasons for this but perhaps the most obvious is that you can never get caught out telling the truth. If it is a simple lie that you have just told to one person then it should be easy enough to remember but one lie does tend to lead to another and we can indeed weave a somewhat tangled web when first we practice to deceive. Fortunately nowadays there are several helpful tools that can help us keep track of this tangled web, the most obvious of which is the spreadsheet. Spreadsheets are remarkably versatile things and certainly need not be confined to work or finances.

Let’s say, as a simple example, that you have a wife and a mistress. You have given a false name to your mistress, so that she can’t cause trouble if you break up, and told her that you are a lion tamer because it sounded more exciting than your real profession. Well if you can’t keep track of that in your head then I would suggest that you are probably a likely candidate for the local Alzheimer’s society but if you were going to create a spreadsheet to keep track of the situation it might look something like this.

Nowadays most people have a Smartphone and there are several free spreadsheet applications you can install on your phone perhaps the most obvious one being the one that comes with Google Docs.

I am sure you can see where this is heading but let’s say that one day you see an attractive young lady in the pub wearing a T-shirt that says ‘London school of Acting’. It might seem reasonable to assume she was an actress. Are you most likely to introduce yourself as Steve Coolnuts, the lion tamer, or rich casting director Antoine Spielberg (nephew of the famous producer). A few days later you are in the public library and you see a bookish looking bird reading The Literary review. Now here is a dilemma. Should you introduce yourself as Lion Tamer Steve Coolnuts or casting director Antoine Spielberg? The answer (of cause) is that you should introduce yourself as the struggling author (because you have spent all your money on Jane, the mistress and the wife) John Shelly, distant relation of Percy and Mary Shelly and our spreadsheet now looks like this:-

Rather than creating one huge spreadsheet it is probably preferable to have various sheets for different things. Was it your wife or your mistress that you took to that little restaurant in Essex? What was the name of that pub where you first met Jane? When was the last time you went out with Helen? and did it end up with a bit of rumpy pumpy? Let’s create a new sheet called dates to keep track of such things. It might look a bit like this :-

So far we have just been treating the spreadsheet as a notebook but now we have accrued a fair amount of information in there it can be made to help you take decisions. Lets postulate that you are living beyond your means and one of these women has got to go. We now know how many times this month you have taken each of these ladies out and how many times it resulted in forming the beast with two backs. With a few fancy formulas this can be used to create the following graph. 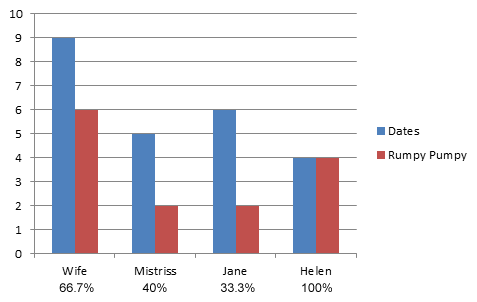 We can see then that in terms of ‘return on investment’, even if KFC was not vastly cheaper than The Regency Hotel, Jane is definitely in the safe zone. The wife is clearly surpassing expectations and it looks as though Jane and the Mistress are on fairly thin ice.

These spreadsheets can get as convoluted as you like. You could incorporate pivot tables, advanced charting, macros and all sorts of fancy formulas but anyone with that level of spreadsheet expertise is unlikely to have one girlfriend, and almost certainly not enough to warrant a spreadsheet. In Summary, although in many ways the lot of the modern day liar has got a lot harder as Facebook, Twitter and suchlike drive a coach and four through much of our privacy, there are some advantages to being a 21st century liar as well.